Throughout 2019, most of the cryptocurrency market has been on a bullish trend. This increase, however, has been more pronounced in the Bitcoin price than that of altcoins. Therefore, the altcoin market cap dominance has been consistently shrinking.

During last week, several altcoins — most notably NEO, Ontology (ONT), and TRON (TRX) — posted gains between 20-42 percent, aided by the Chinese president’s endorsement of blockchain technology. However, other major coins, such as Ethereum (ETH) and Litecoin (LTC) barely posted single-digit increases, paling in comparison to those of Bitcoin.

Does this mean that “altseason” has begun — or is it just a ripple effect of the increasing Bitcoin price?

Let’s look closely at the movement and determine which is true.

The altcoin market cap has been decreasing since June 24.

The decrease continued until the market cap reached $60 billion, where it made a double bottom. This also coincided with the 0.786 fib level.

The creation of a bullish pattern inside a significant support area most often leads to continued upward movement.

Additionally, this bullish outlook is strengthened once we incorporate the MACD & RSI into the analysis. Both of them have been generating bullish divergence — and the latter has even crossed into positive territory.

The combination of technical indicators and price movement makes us believe that the altcoin market cap will continue to increase.

We have previously discussed that, whenever the Bitcoin price consolidates, the dominance of the market cap of altcoins often increases. On the other hand, whenever Bitcoin makes rapid upward or downward moves, the altcoin dominance decreases. Therefore, while the market cap dominance of altcoins had been steadily increasing since the beginning of September, the recent pump in the Bitcoin price caused a sharp decrease — causing it to break down from the support line and validate it afterward.

If Bitcoin continues its rapid movement, the dominance of altcoins will likely continue to decrease. 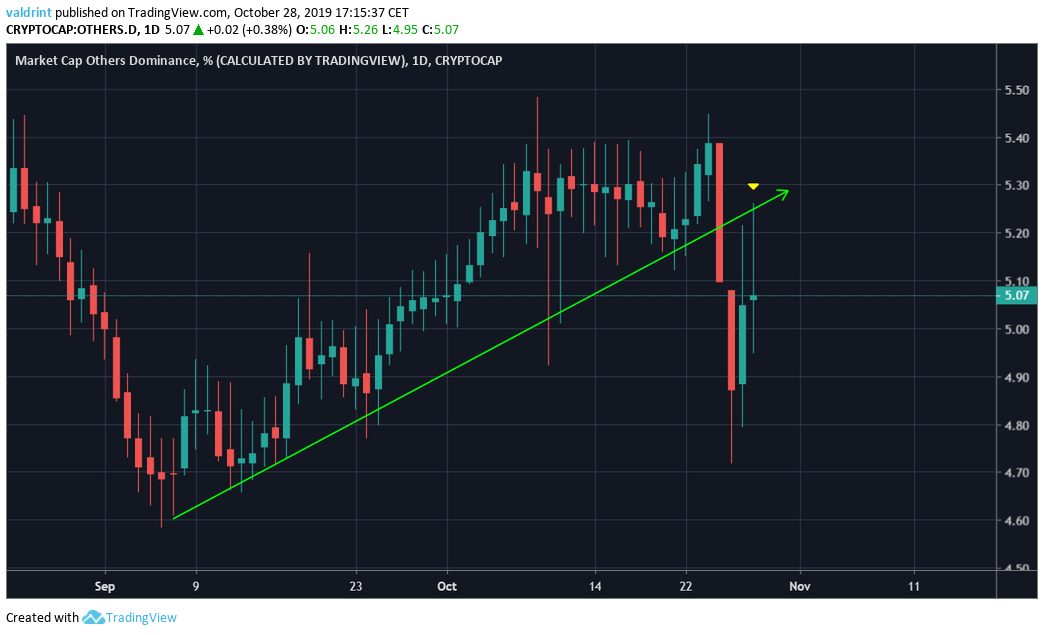 Disclaimer: This article is not trading advice and should not be construed as such. Always consult a trained financial professional before investing in cryptocurrencies, as the market is particularly volatile.

Images are courtesy of Shutterstock, TradingView.

Did you know you can trade sign-up to trade Bitcoin and many leading altcoins with a multiplier of up to 100x on a safe and secure exchange with the lowest fees — with only an email address? Well, now you do! Click here to get started on StormGain!

ATOM Increasing at a Gradual Rate: What’s Next? – BeInCrypto

The ENJ Breakout Could Have Caused a Trend Reversal – BeInCrypto