Ethereum has seen some mixed price action as of late. Although its trend has generally favored bulls, and the crypto does seem poised to see further upside, it has been woefully underperforming Bitcoin.

This underperformance has caused the ETH/BTC pairing to see degrading technical strength, which may be a sign that further losses are imminent in the near-term.

Despite this technical weakness, one analyst, who previously forecasted the move to $650, is noting that ETH could be on the cusp of seeing a move up towards $1,000 or higher.

At the time of writing, Ethereum is trading up just under 1% at its current price of $659. This marks a notable decline from daily highs of $670 set during a breakout attempt earlier this morning.

This failed breakout attempt came about in tandem with one seen by Bitcoin, with the benchmark crypto surging as high as $24,200 before retracing.

Bitcoin is still guiding ETH, despite the trend of underperformance, making it vital for Ethereum that BTC continues rallying higher in the mid-term.

One crypto trader who called for $650 Ethereum prices while it was still trading at sub-$200 is not calling for a move to over $1,000.

He spoke about this in a recent tweet, explaining that upside is likely imminent in the coming weeks. 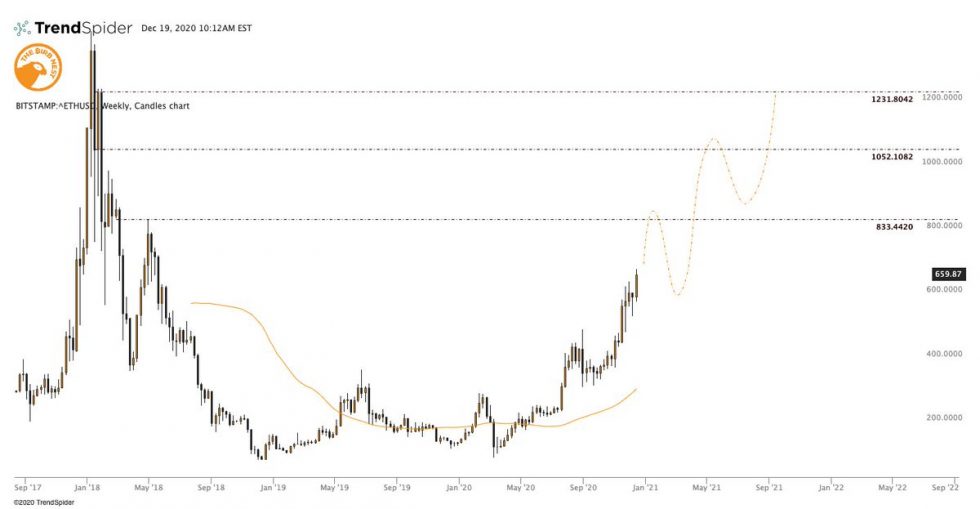 For this possibility to come to fruition, it is imperative that Bitcoin also shows continued signs of strength.

Any BTC downturn will likely create headwinds for Ethereum and lead altcoins to see devastating losses.