Bitcoin and the entire crypto market are seeing mixed performance. While BTC stalls and struggles to break above its resistance in the upper-$30,000 region, Ethereum and many altcoins see explosive rallies.

This has made it somewhat unclear as to what BTC’s near-term fate is.

One analyst observed that the benchmark cryptocurrency is on the cusp of seeing a movement to fresh all-time highs, but it must first surmount one crucial resistance level.

At the time of writing, Bitcoin is trading up just over 1% at its current price of $37,150. This marks a massive rebound from recent lows of $30,000 that were set last week.

The crypto has formed a wide trading range between these lows and its highs of roughly $40,000.

Until BTC breaks above its range highs at $40,000, it may continue seeing relative consolidation.

One analyst explained in a recent tweet that a close above one key Fibonacci level could allow Bitcoin to rally to fresh highs.

BTC is pushing up against this level; however, a rejection could lead it towards the sub-$30,000 region.

“Close above .618 – target all time highs. Close below the mid and grey zone 34k then most probable of the yearly level retest around 28-29,” he said while pointing to the below chart. 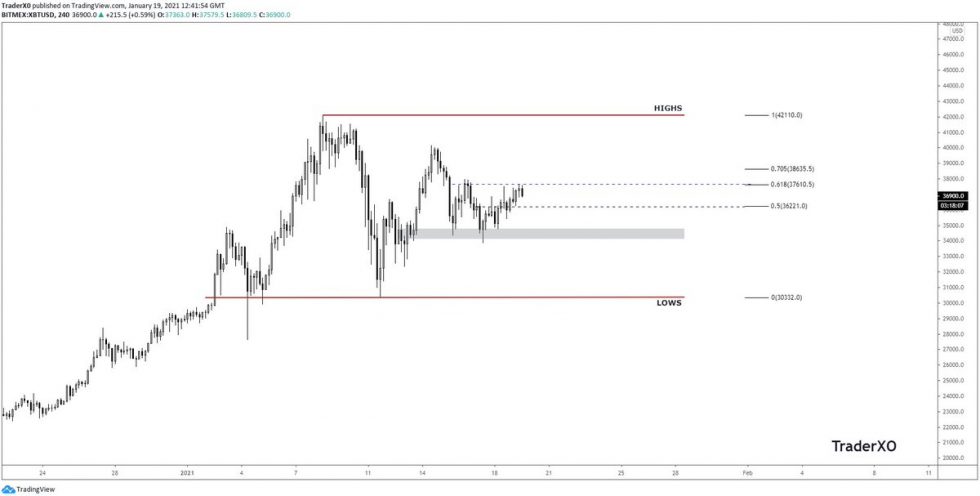 The coming few days should provide investors with detailed insights into Bitcoin’s mid-term trend and how it will influence other digital assets.