As a new COVID-19 stimulus bill is debated in the United States Senate and Bitcoin (BTC) begins to bounce back from its volatility lows, the demand for stablecoins continues to grow. Powered both by the stability that they provide to tokenholders and the demand created by decentralized finance lending and yield farming, stablecoins — Tether (USDT) in particular — continue to hit record figures consistently.

According to a report by cryptocurrency data and research firm Messari, USDT may soon become the cryptocurrency with the greatest daily transaction volume in terms of U.S. dollars transferred across all Tether-enabled blockchains. According to Ryan Watkins, research analyst at Messari, that may happen sooner rather than later. He told Cointelegraph: “USDT certainly could flip Bitcoin in transaction volume in August, and if not then sometime soon after. Stablecoins as a whole have already flipped Bitcoin in transaction volume.”

While USDT and a few other dollar-pegged tokens such as Binance USD (BUSD) or USD Coin (USDC) have been leading the way in the growth of stablecoins, even commodity-based stablecoins have been gaining traction lately. Tether’s new gold-backed stablecoin, Tether Gold (XAUT), is reportedly seeing high demand as its underlying commodity recently broke above the $1,900 mark — a number that gold has not seen since September 2011 — even coming close to reaching $2,000 for the first time.

Although stablecoin volumes have, like most of the cryptocurrency market, remained stagnant during most of the summer, the last few days have seen a considerable uptick in volume for USDT and other dollar-based stablecoins, especially Binance’s BUSD. 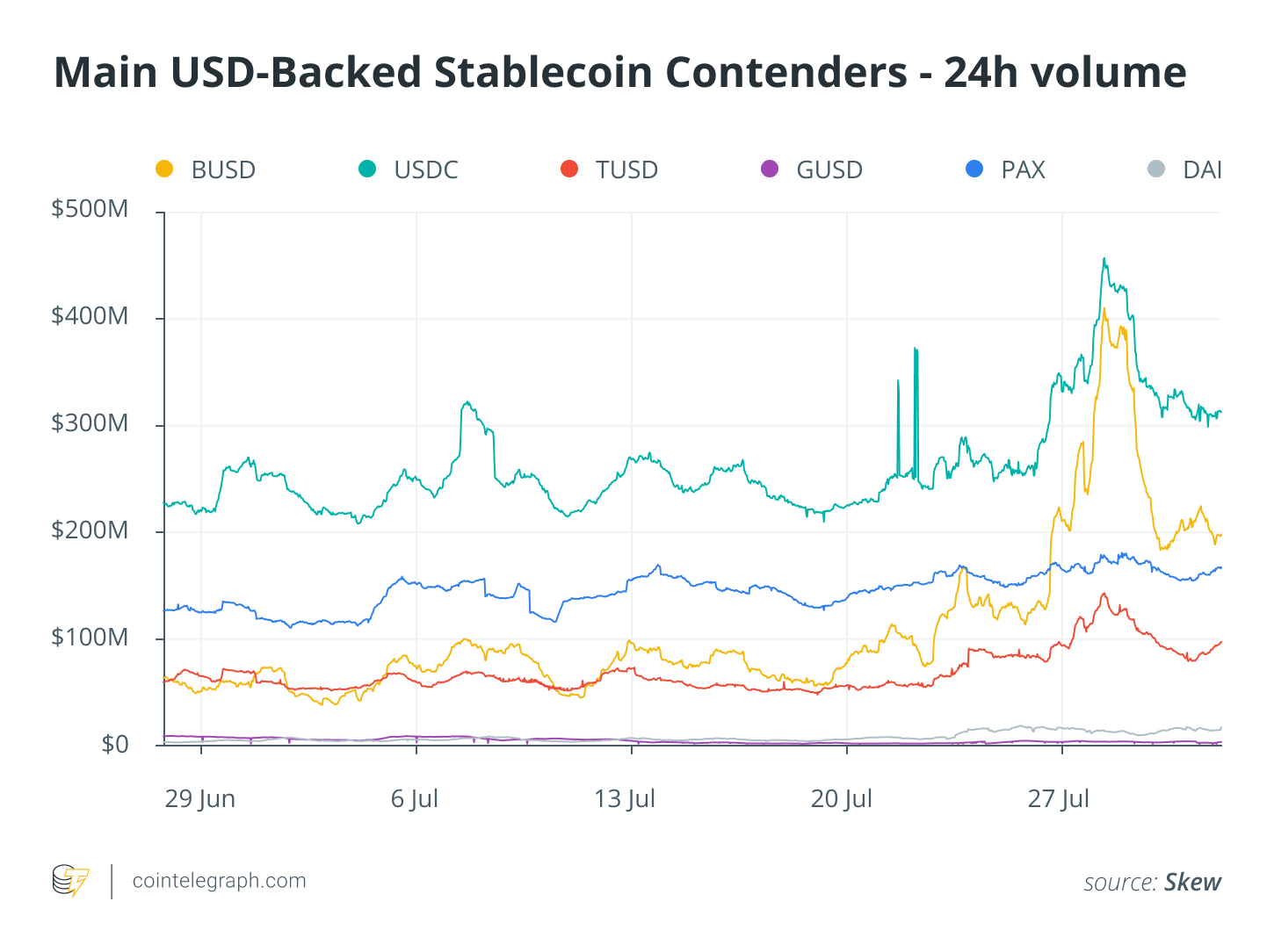 Although stablecoin volume has picked up recently, it is still far from the all-time highs achieved in March. However, the collective market capitalization for all fiat-based stablecoins has been growing consistently, increasing by $3.8 billion in the second quarter of 2020 and counting for over $13.4 billion at the time of writing.

USDT alone is responsible for $11 billion out of the aforementioned $13.4 billion, having only just reached the $10 billion milestone on July 22. This means that USDT’s market cap has more than doubled from $5 billion since March. In fact, Tether even temporarily surpassed Ripple’s XRP to become the third-largest cryptocurrency in the market.

Following USDT, Circle’s USD Coin is the second-largest stablecoin, having been the first Tether competitor to surpass the $1 billion market cap figure in early July. On the other hand, Binance USD has been the fastest-growing stablecoin in 2020, according to Messari.

Why is there demand?

A demand for stable, safe assets like the U.S. dollar may have been the biggest driver for the success of stablecoins in the first half of 2020, according to Ido Sadeh Man, founder of Saga Monetary Technologies, who told Cointelegraph: “The allure of stablecoins is simple: they appear to promise stability — and given the economic tumult of 2020 so far, it is understandable why they are gaining so much attention.”

As Bitcoin surged over the $11,000 mark throughout July 26 and 27, exchange inflows for USDT reached a 2020 high, which suggests buying pressure for BTC and other cryptocurrencies. This is further supported by the decreasing balance of Bitcoin currently being held by major exchanges. In fact, activity for all three of the largest stablecoins — USDT, Dai and USDC — grew tremendously during this time.

“We have seen in recent months that a single currency value can fluctuate wildly with little warning, due to external factors. Users are seeking more stable havens for their assets value — which is why there have been such significant inflows. Those seeking stability need to interrogate the mechanisms which stabilise their chosen coin — otherwise they could be risking asset value if the currency their stablecoin holding is tethered to unexpectedly fluctuates.”

Stablecoins are only as strong as their underlying asset or assets. However, this novel technology still faces many challenges, and the biggest one may soon become regulation, especially as central bank digital currencies start to become a reality. Last year, a panel of senior financial regulators in the U.S. warned about the risk of stablecoins and how their mainstream adoption can negatively impact the economy, and thus, Facebook’s Libra project may never see the light of day.

The problems don’t end there, as technical issues can also present themselves in the future as they have before. For example, the peg of a stablecoin may be broken if there is a security breach, fractional reserve practices, a lack of liquidity or even a lack of trust in the issuing entity. Even large swings in the price of Ether (ETH) can have a devastating effect on the peg of a DeFi-based stablecoin such as MakerDAO’s Dai.

However, there is still much to look forward to. It seems stablecoins have a lot of potential when it comes to providing a possible solution to some of the world’s biggest financial problems such as income inequality and lack of access to banking. Stablecoins are also an important infrastructure piece of the cryptosphere, particularly the DeFi space. As Marc Zeller, integration lead at Aave — a DeFi lending and credit platform — told Cointelegraph: “Stablecoins are the cornerstone of decentralized finance. As a hedging tool, medium of exchange, and unit of account, their growth has largely enabled the DeFi bloom.”