As Chainlink (LINK) reaches a new all-time high after all-time high, it would be expected to see a similar move on Tezos (XTZ). This is because these two coins have been moving in tandem in recent years and have been one of the few resilient digital tokens despite the cryptocurrency bear market during the period.

Tezos did indeed show strength as XTZ rallied from $2.95 to as high as $4.50 in the previous four days, resulting in a rally of more than 50%. But is an even bigger rally in the making for Tezos? Let’s check out the charts.

As the chart is showing, the price of Tezos broke the resistance zone at $3.25 and started to show impressive strength. XTZ price rallied from $3.25 towards $4.50 in a matter of days. 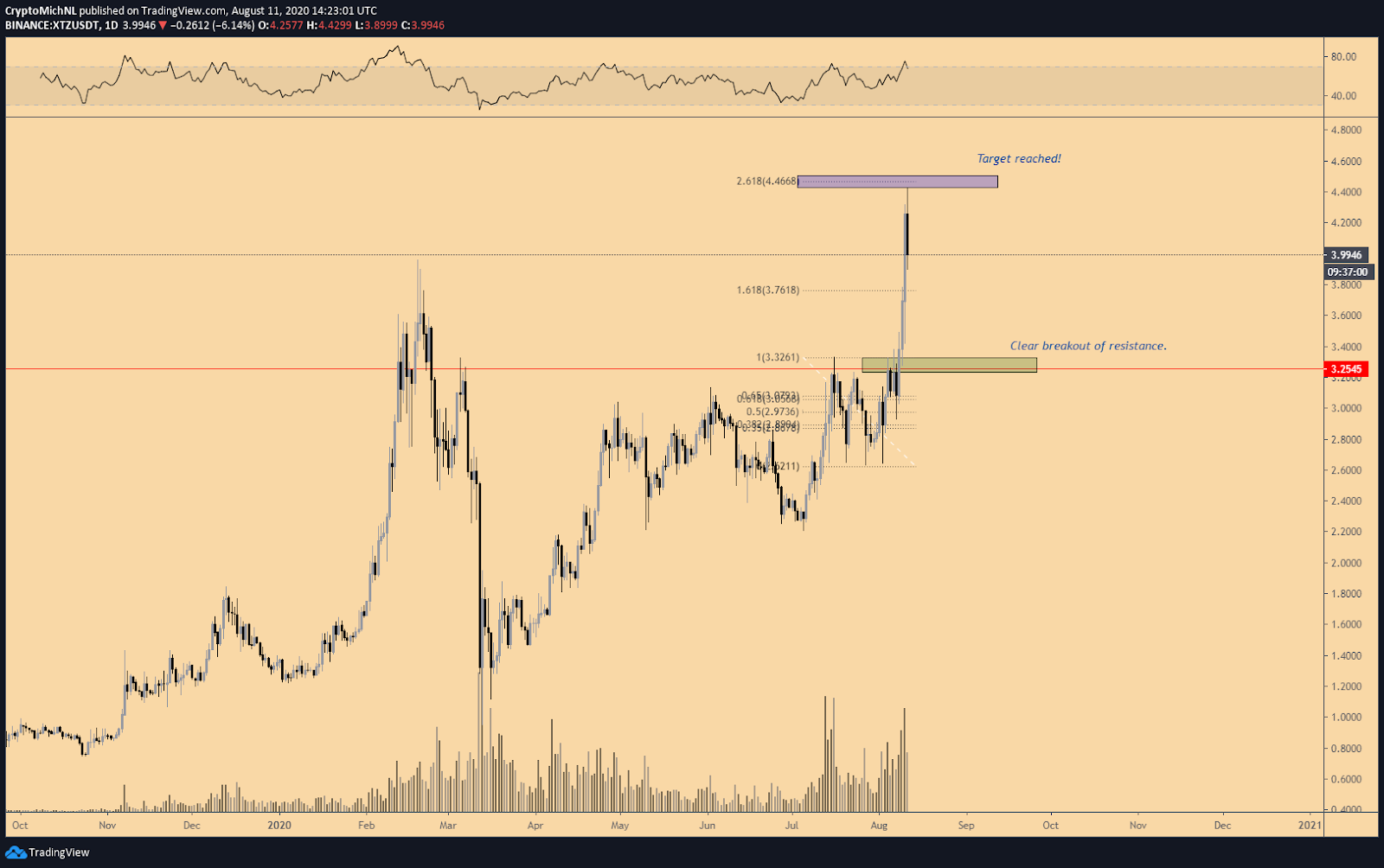 If a cryptocurrency is in price discovery, the easiest way to determine target zones is through the Fibonacci extension indicator. In trading, it’s ubiquitous to measure these targets by defining the 1.618 and 2.618 Fibonacci levels.

A similar occurrence happened in the Tezos chart as the price broke through $3.25 and rallied toward the 1.618 Fibonacci level, after which it immediately continued to the next resistance zone at the 2.618 Fibonacci level. The price of Tezos then reversed, which can be attributed largely to the pullback in Bitcoin (BTC).

The 4-hour chart is clearly showing some support zones, which are crucial to watch. As commonly known, buying green candles doesn’t guarantee further profits. Such a strategy is a very aggressive and emotional strategy in trading.

As measured in the chart, entering a trade through defined support zones is clearly a better approach. 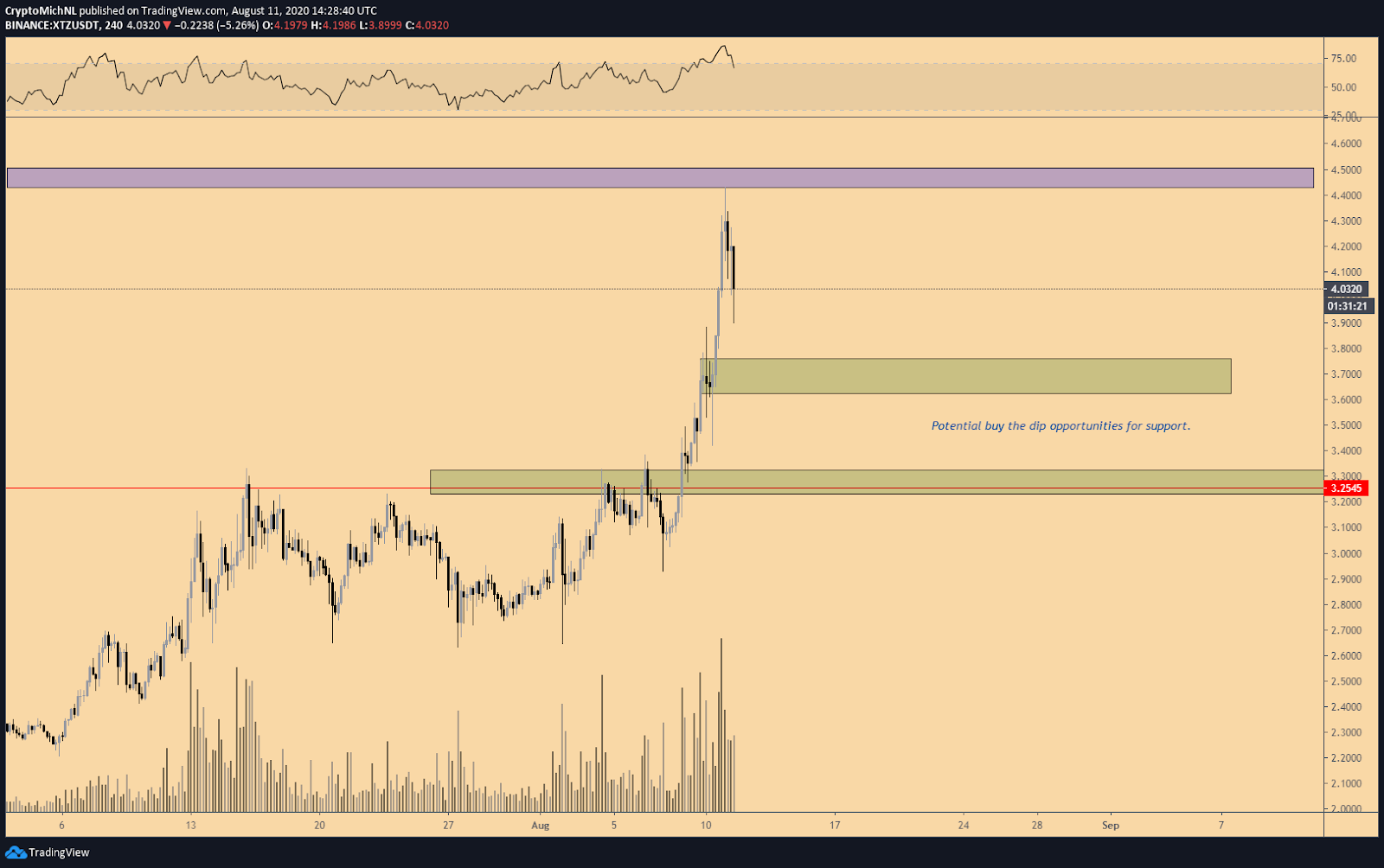 For example, the 4-hour chart shows a few critical support zones. Of course, the previous resistance at $3.25 is an obvious support zone and mainly the best area for any opportunities to buy.

However, given that there’s such a volatile move, it’s unlikely that these zones will be hit. In upward trending markets, the best support/resistance flips generally won’t be hit, as investors and traders front-run these levels.

As the chart shows, the next opportunity to look for support is the $3.60-3.75 area, which should generally be providing support on the lower timeframes. From here, the price is ready to consolidate in a range, before further expansion occurs. 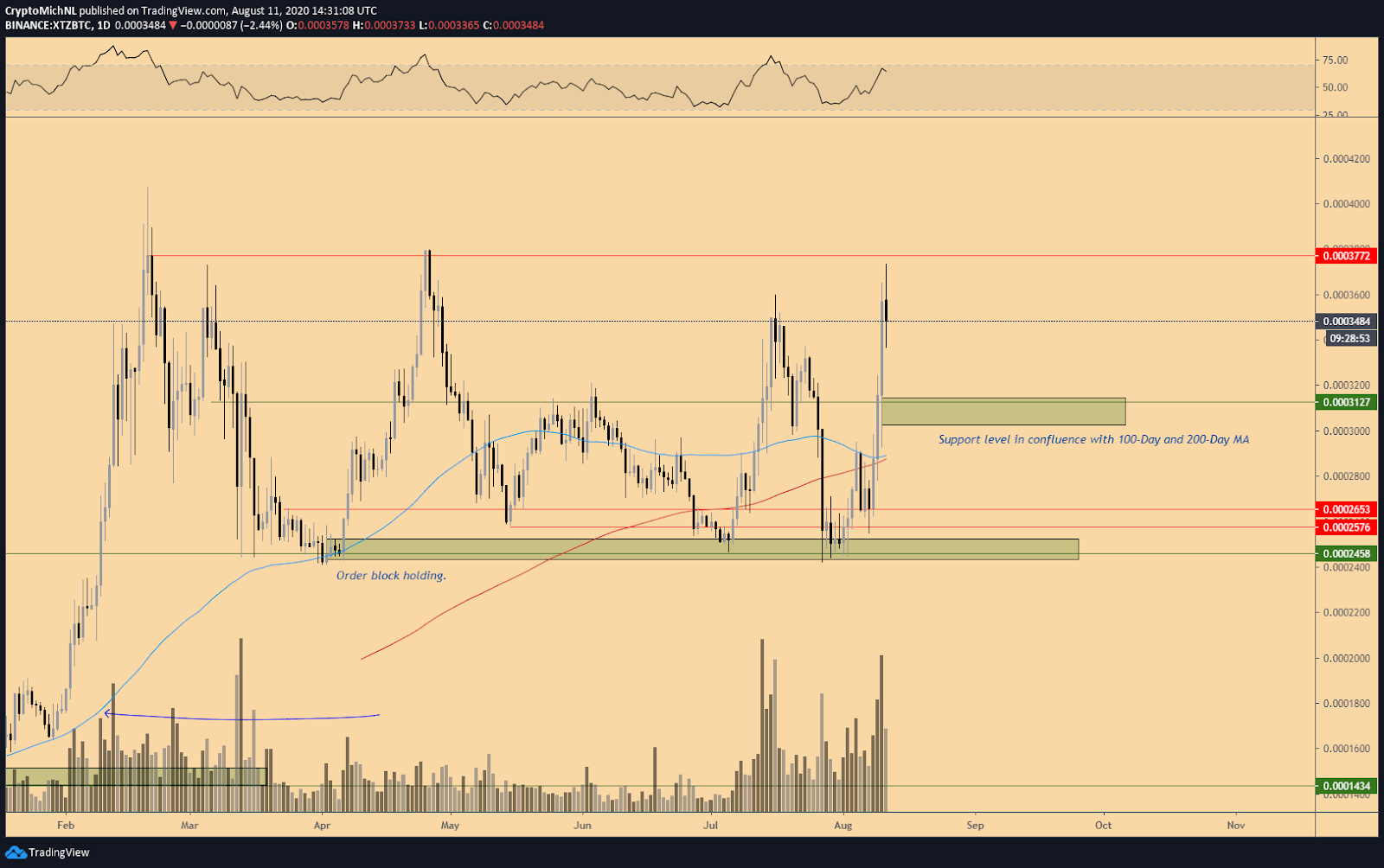 The BTC pair of Tezos shows a clear range-bound structure, through which the price of Tezos has flipped back above the 100-day and 200-day moving averages (MAs).

Essentially, the resistance zone at 0.0003700-0.0003800 sats has been tested many times in the previous year. A renewed test should most likely give a breakout to the upside.

The crucial support level to hold is defined in the green box. That area is confluent with a horizontal support level, alongside the 100-day and 200-day MAs coming serving as support.

As long as these MAs hold, further upward momentum is expected as the markets would remain in bullish territory.

Several price targets for XTZ can be defined using the Fibonacci extension tool. 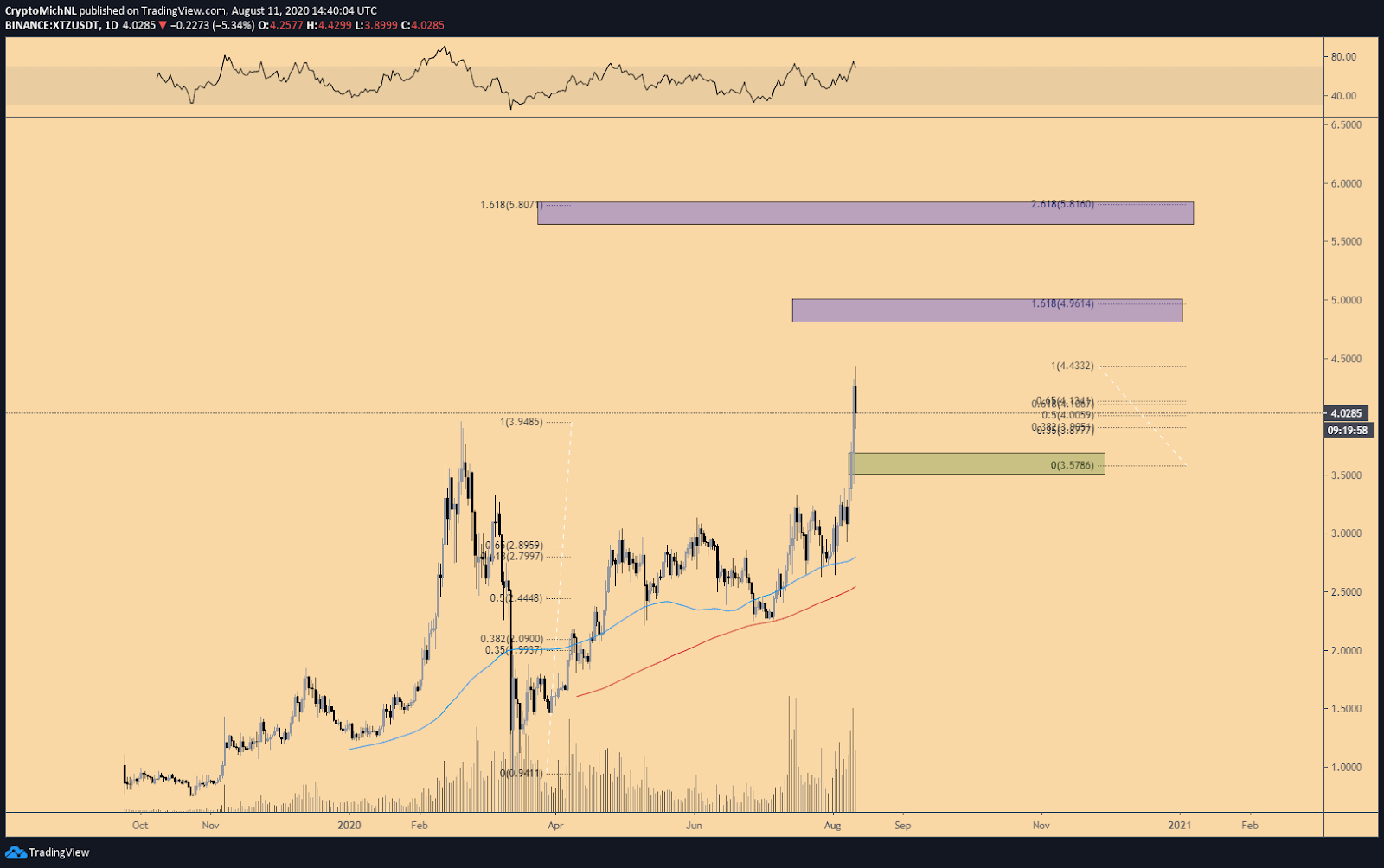 The larger swing objectives are classified around the $6 level. However, the chart also shows a target at the $5 level.

The views and opinions expressed here are solely those of the author and do not necessarily reflect the views of Cointelegraph. Every investment and trading move involves risk. You should conduct your own research when making a decision.